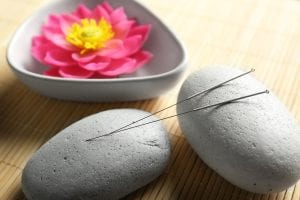 The first time I went to my acupuncturist I was holding my head in my hands. Literally. The migraines were getting to an unbearable point and I couldn’t take it anymore. Medication hadn’t worked for a long time and I had my method of easing the pain. It went something like this: my headache would start and I would go into the bathroom, lights off, and take 800mg of ibuprofen with a 12oz can of coca-cola. Next, I would get in a shower as hot as I could take it and put my head directly into the stream of water and leave it there until it felt like I was drowning. From there, I would stay in the steamy bathroom for a few minutes before getting an ice pack to put over my eyes, while laying in my dark bedroom. At this point I would pray that nobody breathed too hard, the noise from which would make me crazy. Sounds like an effective treatment, huh? For obvious reasons, being stuck with needles sounded like a better option!

Okay, so back to my first visit. My acupuncturist, Carlos, brought me into a treatment room and asked if he could place needles into my head while he did my intake; he couldn’t stand seeing me in that much pain. So through the tears I said yes and then held my breath. Eight needles later, I was speaking with Carlos, who actually took me seriously despite looking like somebody out of Hellraiser. Ten minutes into the intake my headache subsided and I was sold. Stick needles in my all day, please! It was a miracle. . . and 4,000 years of Chinese medicinal practice.

Acupuncture is now one of the highlights of my week.  I settle into the treatment room, have 30 or so needles placed on my head, hands, feet, arms, legs, neck and wherever else Carlos decides is best. Then the lights are dimmed, Native American flute music goes on, and I fall into meditation & prayer for 30 minutes. While I rest, the needles are doing the work of opening up various pathways that allow for Qi (chee) to flow through my body. (By the way, that feels like your body sinking into the earth; heavy and connected. It’s hard to describe but feels great!) Those pathways create energy flow, the lack of which causes pain in the body. The greater the flow, the greater the energy, the better my health – and the stronger my pathway to God. That is the really cool part.

During my treatment I lay perfectly still (wouldn’t you if you were loaded up with needles?!) and close my eyes. My phone is put away. My Apple Watch is in my purse. Nobody can reach me and I am not taking in any outside inputs. It is the perfect time for me to open up my pathway to prayer, to create energy flow to God and to get spiritually healthier. Just like the needles opening up the healthy flow in my physical pathways, I am connecting to God; the lack of which causes pain to my spirit.

So while I really hope that I don’t have any more headaches – ever – I can now say that I have gratitude for the pain, from which I have grown closer to God, learned the value of total spiritual meditation and improved my health in more ways than I expected. My wish for you is that you can shut it all down at least once a week to open up your pathways . . . needles optional.

Delivered straight to your inbox.

You have Successfully Subscribed!

Your personal information will be kept safe and never shared.

Holy Week at Home- an experience of music, altar ...

Our Holy Week at Home altar is set up and ready ...

Over 3/4 of the world population has noticeable ...

As a Christian woman who practices in the ...

As I have explored artistic representations of ...

“And the Word became flesh and lived among us, ...

As we follow the North Star, shining brightly over...

Oh how I miss singing in church! My favorite hymns...

I always love reading about the wise men and ...