Beautiful! What I Learned by Playing in Creation 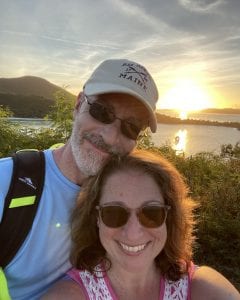 Every January my husband Michael and I say goodbye to freezing temperatures, gusty winds, and Connecticut snowstorms to make our way to St. John, USVI. We look forward to this trip all year long, in part because we escape the New England winter, and in part to recharge as we end one year and begin another. Our time on the island is an opportunity to take in the beauty around us and center ourselves with God and each other.

The island of St. John is approximately 60% national parkland. This makes for a staggering 7,259 acres of protected land to explore on foot and 5,650 acres of submerged land to explore underwater. With that amount of land and sea to navigate, it is impossible to discover the magic found in hidden nooks during one visit, which gives us a wonderful excuse to keep going back.

Michael brought his underwater camera and all of the related gear with us when we went to the island the first time. He had been planning for months to film swimming with the sea turtles that were laying eggs in the seagrass and hunting for tropical fish living in the coral reefs. We couldn’t wait to see it all and during our flight, we talked about all of the bays we wanted to snorkel and ruins we wanted to hike to. The list was long and we hoped to get as much in as possible.

The first day, and those that followed, were announced loudly by local roosters. Our time was filled with snorkeling adventures, drives along the steep mountain switchbacks, and hikes along some of the 20+ trails weaving up and down the mountains and the coastline. We saw so much of God’s creation during those days. God’s paintbrush was vivid when He colored the multi-hued blue and aqua seas and the verdant vegetation. And with each view we passed, each turtle we swam with, Michael caught on video so we would never forget what we saw. 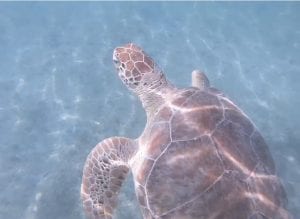 We had an amazing time discovering this land that God created and the National Park Service protects. As we took off for home, we immediately missed the island we had only just started to learn about and within a few weeks, we booked our next trip for the following January.

This summer, between trips, I had the opportunity to take an eight-week class with Troy Cady, titled Play in Creation. I signed up for this as part of the Black Barn; an online community that brings together faith, the arts of all kinds (culinary, writing, gardening, painting, etc.), and spiritual life. For eight weeks I learned about how God created the world and how He longs for us to delight and play in it. The table was about noticing, enjoying, letting go, and having fun in creation. This was a message I desperately needed in the midst of the pandemic. I am a problem solver and social justice champion. My family is convinced that when God created me He announced, “this child will be able to manage crises”. That said, playing in creation was not in my vocabulary, which is exactly why I chose to sit at the table. When it was over, I had the insight and tools to simply be present and enjoy God’s magnificent creation. What a wonderful shift from worrying about how to “fix it all”.

And so this year, as we cruised along at 35,000 feet, Michael and I talked about what we were going to do with our time on the island. He had a list of places we had yet to explore and we talked about going back to our favorite spots. But this year he didn’t have all of his equipment with him. This year we both decided that playing in creation was more important than filming it. So that is what we did. We splashed in the water and floated; listening to the sea in our ears and calm breath going in and out of our bodies while the sun warmed our faces. We rested in God’s arms – the rich salty sea He created to hold us up. We watched sunrises, stood still. We laughed and played with the donkeys and goats native to the island. We snorkeled the reefs, with a slower more intentional pace and found strangely 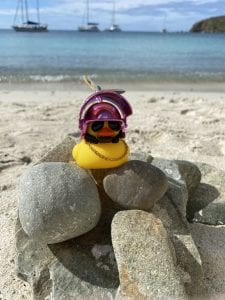 shaped little fish and fan coral that we likely missed in the past. Oh and we brought my rubber duck, Thelma, (my daughter bought her for my car) as a sort of “flat Stanley”, and took pictures of her all over the island. Is there anything more playful than traveling with a rubber duck wearing a pink helicopter helmet and sunglasses?

Thanks to my time at Troy’s table, and the encouragement of my barn family, I took new eyes to the island this year and saw more of God’s handiwork in the most glorious way. And now, as we are in the midst of the Lenten season, when we don’t think of play as part of the agenda, I challenge you to think again. The season is about getting closer to God as part of preparing for his death on Good Friday and resurrection on Easter Sunday and there are ways to play (let go) and do that. Read some new books, practice a daily devotional, find some artwork online that depicts this time of year in a way you never considered, write in your journal about how you are feeling in this season. These are all, as I learned from Troy, ways of playing in the world and wonderful ones at that.

If you decide to play at all, let me know what you end up doing. I bet you will give me, and our community, some great ideas.