Out of Place on Retreat

I felt so out of place; like a fish in a tree. That is what I told the women during a quiet reflection on the last night of our retreat together. I was so far out of the warm waters I like to swim in that it felt like an ice bath – the shock to my system was one that I was not prepared for in the slightest. 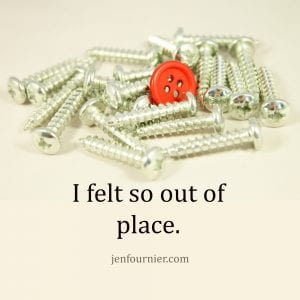 I had driven 10 hours, from Connecticut to Ohio, to go on retreat. I was looking forward to this opportunity to spend time in a quiet place. Lent has been so challenging and I just wanted to meet other women, reflect, write, and recharge. After going through a confession of both sin and faith earlier in the month, reading biblical passages on sin and repentance, and navigating a few work-related obstacles I was so ready for rest.

But then a plot twist revealed itself.

Lent was in Ohio too.

The result? Well, after getting settled in my room at the convent where the retreat was held, I entered into a mourning period so painful that I retreated in a different sense; I moved back, withdrew, and hid.

Oh and before I continue, can we just take a minute and remember that I’m on Weight Watchers and was determined to count my points all throughout the retreat. So much for comfort food. (It really has been a “lenty” Lent)

Alright, so what happened you ask? I’ll tell you, but we’ll take the shortcut instead of driving along my mind’s scenic route. It’s a long and windy road, for sure.

My first night in the convent I was unsettled but chalked it up to the long drive, which I had split into two days. So I went to dinner, managing my points of course, and had a nice time. The evening worship was pleasant but I didn’t know the songs being sung – the words were on a big screen, but the tunes were new to me. So I sat and listened and wondered if I was in the “right” place. Everybody seemed to know the songs and each other. I felt alone. Then, after a night of minimal sleep, I was up and skipped the morning gatherings in favor of painting with watercolors. This was 100% new to me and I really enjoyed my time in the art room, however, I still felt unsettled. So I started to write about it. I wrote and wrote and wrote. 20 pages later and I still didn’t have an answer to the question, “what is my problem?”. You all know me. I like answers. This was not sitting well at all.

By lunchtime, I was packed and ready to go home. The unsettled anxiety inside of me would not stop, I was homesick for Michael and just wanted to go. So, I decided to leave the next morning since leaving right then and there would result in a late-night driving on the back half of the trip. I told Mary, the assistant for the retreat who also happens to be the editor of this space, (she’s amazing, people. The best!) that I was leaving the next morning. “I don’t know what the problem is, Mary, but something isn’t clicking for me.” was the reason I gave her. It was the truth, no matter how unsettling it was to both feel and say aloud. Let me also say that this conversation was had in the chapel of the convent. Naturally, God was up to something, as usual. I should have known.

Anyway, fast forward to after dinner (still successfully counting points but inwardly resentful that I didn’t have a full heap of bacon on my not-so-loaded baked potato) when I heard Mary speaking to the retreatants. Something triggered inside. That would be the Holy Spirit, thank you so much. When Mary finished I went to see her and started to cry. Then I ended up in a private spiritual support space with another amazing woman.

I had figured it out.

I had never fully mourned the loss of my dear auntie who was a nun in New York City. And my room in the convent looked just like hers did.

Not so obviously obvious, right?

Well friends, since we are on the shortcut I will end by saying that I spent time talking, crying. I felt my Auntie Annette with me, flooding me with warmth. I stayed for the rest of the retreat and it was simply beautiful, minus the withdrawing and hiding. 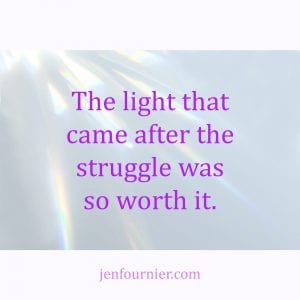 The light that came after the struggle was so worth it.

And now today is Maundy Thursday, with Good Friday upon us. These days are more difficult than my first days on retreat But I stayed in it. Stayed with it. Light came.

As we face these final days of Lent, during the Holiest week of the year, I pray that you will sit with me in the discomfort. Sit with what is about to happen. Sit with Jesus’ torture and crucifixion. Sit with the pain he suffered. We cannot skip it, friends. For if we close our eyes today, refusing to open them until Easter Sunday, the true joy, the light, and hope of His resurrection won’t be as powerful. It can’t be unless we do the hard work first.

Special blessings for you all during this extraordinary week,